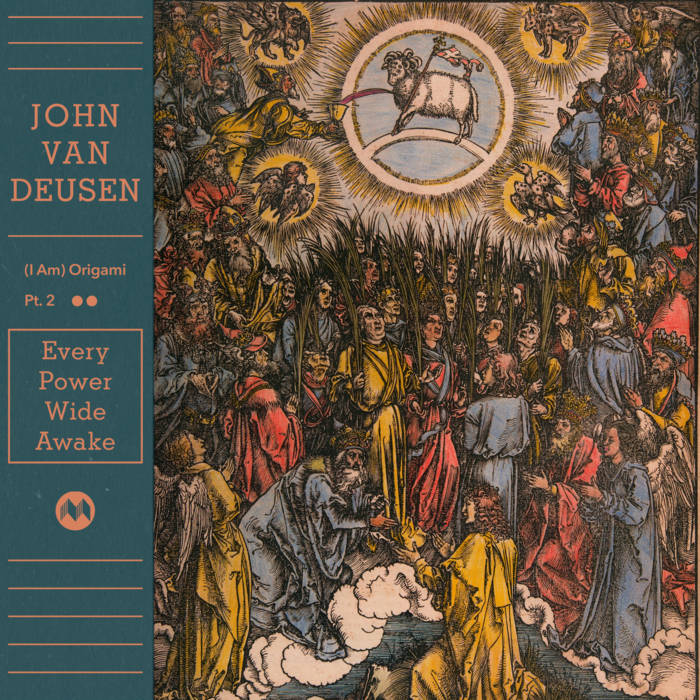 Jared Both The third section of this song is a banger! Favorite track: With Every Power Wide Awake.

jPEG I’ve been looking for this music for years! Thank you!

kianafooks What a beautiful album! I love JVD, and I'll enjoy anything and everything he puts out and this album is no exception. Favorite track: Illuminate My Unknowing.
more...

Hello. Thank you for taking the time to listen to this album, ‘Every Power Wide Awake’. I recommend listening on headphones while alone; preferably in the woods or some place peaceful. Or not, it’s up to you.
‘Every Power Wide Awake’ is at it’s core, a collection of self recorded songs that reflect my personal prayer life. Almost every morning, before my wife Annababe wakes up, I sit alone with black coffee and my Bible; reading and praying. These are the most precious moments of my day. This is when I feel most receptive to the voice of God. This is when I feel truly awake; open to the deeper things of the world, hovering above my busy, self-propelled lifestyle. It’s a kind of heaven.
The title of this album comes from the Christian devotional classic ‘My Utmost For His Highest’, by Oswald Chambers. The entry for January 14th reads, “The quiet passionate insistence of His “Follow Me” was spoken to men (and women) with every power wide awake.” After reading it, this sentence wouldn’t leave my head for the rest of the week. I rolled it over in my mind like a smooth stone in my hand. I wanted to be wide awake. To cut the religious nonsense, get to the essence of true life and move on from my selfish existence; every part of myself electrocuted by God’s love and light. I wanted to live a life for Jesus; I still do. These songs grew out of that heart desire.
Getting the songs out of my head and in to the world was a lengthy process. I won’t bore you with all of the details. However, some of them seem important, if I’m to contextualize the “feel” of the album. First of all, ‘EPWA’ was written and recorded all over the world. The songs were composed and written every where from Anacortes to Nuremberg and Seoul to Chicago. For the recording process I used mobile recording gear assembled for me by my close friends Nick and Jonathan. Let’s be clear: this would not have happened without them.
The bulk of the music was recorded in a cabin on Orcas Island in October of 2015. I had the opportunity to stay alone at the house for the whole month thanks to the overwhelming generosity and support of the Thomas family. Thank you Burke, Barbara and Jesse! What a beautiful time this was for me. I would light a fire and read the New York Times. I would watch out the window for orca whales (I didn’t see any). I would walk to the Lower Tavern and drink beers alone. I played the game of LIFE by myself on my birthday. I would listen to God’s still, quiet voice and then record what I felt my heart was saying in response. I will never forget this meaningful and productive time in my life.
Two other recording locations are obviously worth mentioning. First is Quaker Cove, an old Quaker family camp on the southeast tip of Fidalgo Island. During the summer of 2015 we moved our recording gear in to the Palmer Cabin, which was vacant and uninsulated. Strangely enough, this cabin was decorated with owls (not a purposeful Twin Peaks reference) and kind of felt like it was lived in by a ghost… or at the very least forest animals seeking food and shelter. I must extend a huge thank you to Robert Festa for being supportive and welcoming us. He simply opened the door to the cabin and said, “Go for it. Make something good.” I should also mention that Quaker Cove is once again a thriving and active family camp with wonderful facilities and programs. I’m just glad I got to work there before business started booming again because, let’s face it, it’s more fun to record in strange, lonely places.
The last recording location I should write about here is the Grunewald Guild in Plain, WA. Oh, what a magnificent place to work! I was fortunate enough to be chosen as an “artist in residence” for the Cascadia Residency, a wonderful program facilitated by Fuller Seminary. I was given the extreme privilege of moving my recording gear in to an empty sauna at this peaceful artist retreat right on the Wenatchee river. For two weeks my only job was to write, record, eat, watch Gremlins and read Lord of the Rings. I’m not joking. Oh, to be back in the garden, reading and listening to the river. Yeah, it’s as good as it sounds. (If you want to apply for the residency visit www.cascadiaresidency.com)
So, as I hope I’ve made clear, Every Power Wide Awake didn’t come together quickly; it took over two years of piecing things together like a jigsaw puzzle. During this time I battled my insecurities and fears about openly professing my faith in Jesus to my listener base. I also went back and forth with how to release all of the music (there was over 26 songs at one point). In the end, it seems that the straightest and simplest path is the best one; be honest and don’t over extend your reach. Instead, simply walk forward with what you know to be true and don’t wait for the world to catch up.
So, here is this album; full of songs: some loud, some quiet. Often hectic and immature; just like my prayers in the morning. All of them straight from my messy inner sanctuary in to your headphones or speakers.

"Wake up, sleeper, rise from the dead and Christ will shine on you." - Ephesians 5:14

Recorded at:
The Thomas Family Cabin on Orcas Island, WA
The Palmer Family Cabin at Quaker Cove in Anacortes, WA
The Sauna at the Grunewald Guild in Plain, WA
The Monopath Garage in Anacortes, WA (RIP)
John Ringhofer’s parts were composed and recorded at his apartment in Helsinki, Finland.
Joe Day’s vocals were recorded at his house in Amazon City - “Home of the 12’s”, WA.
Some noises recorded in Nuremberg, Germany on the U-Bahn.

Bandcamp Daily  your guide to the world of Bandcamp

New sounds from Mavi, Ivy Sole & Moderator, plus AJ, the One joins the show, for her latest release